In photosynthetic organisms light is a signal perceived by photoreceptors, i.e. proteins that convert light radiation into biological signals regulating essential cell functions (i.e. stomata opening and closure, photo-orientation of chloroplasts, plant development). Light is also the energy source used to convert CO2 into organic metabolites. When light is absorbed in excess to the photosynthetic capacity of the cells, photoprotective mechanisms known as NPQ (non-photochemical quenching, Figure 1) are activated in order to reduce photodamage.

Figure 1:
Chlorophyll (Chl) molecules after absorbing light are excited to the singlet excited state (Chl*). They can relax back to their fundamental state (Chl) either by photochemistry (photosynthesis), or by light reemission (fluorescence) or by non radiative dissipation (heat). The latter process allows dissipating excess absorbed light, thereby reducing production of harmful species like ROS. Light absorption is also regulated by State Transitions, a process involving a « slow » movement of light absorbing proteins between the two photocenters of oxygenic photosynthesis in order to optimize their use of absorbed light. In general, state transitions mostly occur at limelight intensities limiting photosynthetic activity, while NPQ is mostly active at oversaturating photon fluxes.

NPQ can be divided in mainly two components:

(1) qE (high-energy state quenching), the major and fastest component of NPQ that depends on the buildup of a high ΔpH across the thylakoid membrane (i.e., a low lumen pH), on specific carotenoids and, in the case of Chlamydomonas, on the protein LHCSR3. It is a nucleus-encoded, chloroplast-localized protein that is induced under strong illumination. Full induction of LHCSR3 and qE takes few hours at variance with higher plants that the protein effectors of qE are constitutively expressed (Allorent et al., 2013). The signal transduction process that controls the expression of LHCSR3 involves Ca2+ signaling events and requires an active photosynthetic electron flow (Petroutsos et al., 2011) but the molecular mechanism behind this process in still largely unknown.

(2) state transitions (qT), a change in the relative absorption capacity of the two photosystems (PSII and PSI). (Figure 2). This results from reversible phosphorylation of light harvesting proteins. We have recently shown that the increased ability of Chlamydomonas to perform state transitions compensates for the slow induction of qE during the early stages of high light acclimation (Allorent et al., 2013, Nagy et al., 2014). 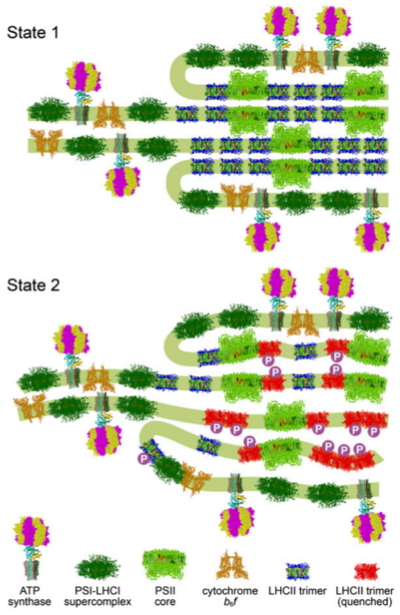 Figure 2:
Chloroplast remodeling during state transitions in Chlamydomonas reinhardtii as revealed by noninvasive techniques in vivo. Hypothetical model for the chloroplast remodeling during state transition in C. reinhardtii. Side views of the membrane planes showing alterations in the thylakoid ultrastructure and photosystem supercomplex composition. For S1 (Upper), thylakoids are more stacked, and large arrays of PSII–LHCII supercomplexes reside in the appressed regions. For S2 (Lower), a number of LHCII proteins are phosphorylated, and the thylakoids are partially unstacked and undulated.

We have recently discovered that a photoreceptor protein controls transcription of LHCSR3 and that LHCSR3 transcription is inhibited by acetate and other metabolites. We are currently trying to unveil the mechanisms that tightly regulate the interconnection between photo-perception, photo-utilization (metabolism) and photo-protection in the green microalga Chlamydomonas. Part of this research is funded by the French National Research Agency (ANR-10-LABX-49-01; Labex GRAL).